The land of the long white cloud 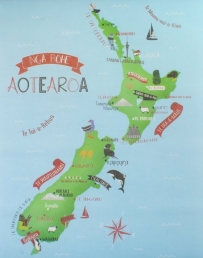 New Zealand is a modern country with a rich cultural heritage. It is a stable English speaking democracy with a population of approximately 4.7 million people, making it one of the least crowded countries in the world.

The country is known for the beauty of the landscape. The cities are clean, open and lively. It is a rich mix of cultures – including Maori, European, Asian and Pacific islanders.

Here the safety and security are values. It is ranked 4th on the Global Peace Index for the most peaceful nation on earth.

Auckland, the City of Sails, is New Zealand’s largest city. It is the country’s eco

nomic and education hub with campuses of three of New Zealand’s eight universities: The University of Auckland, AUT University and Massey University. The city is a modern and vibrant, well known for its mild climate, glorious scenery and very friendly people. Auckland is ranked third out of 221 world cities for quality of life.* (Mercer Consulting Quality of Living Survey 2016)

Wellington is the capital city and second most populous urban area of New Zealand. It is a beautiful, vibrant, safe and cosmopolitan city. Many foreign embassies are located here. Lonely Planet has referred to Wellington as ‘The coolest little capital in the world’

Christchurch is the largest city in South Island, and the country’s third-most populous urban area. It has the fastest growing economy in New Zealand and offers a diverse range of work opportunities. International students in Christchurch are valued and embraced for the cultural diversity, international perspective and life-long friendships they bring.

Dunedin is known as the Edinburgh of New Zealand, it wears its Scottish heritage with pride. It is one of the best preserved Victorian and Edwardian cities in the Southern Hemisphere. Its character is influenced enormously by its students.